In 2019, Kyivstar and 1+1 media combined their efforts and launched a joint “Kyivstar TV” project – a service with legal content and video libraries.

More than 320 TV channels from all over the world, including 100+ in HD quality and 40+ Kyivstar TV exclusives. Broadcast control functions include: pause and scroll for more than 140 channels, a feature to watch pre-recorded broadcasts through 14 days, video library, which has more than 20 000 movies, cartoons, shows, exclusive projects from Ukrainian and international film studios (Paramount, FOX and others).

The amount of Kyivstar TV’s subscribers is constantly growing thanks to high-quality service and a large number of supported devices, such as Android set-top boxes, that have a significant volume among customers. Inext developed for Kyivstar an exclusive modern media player with Android 10 (AOSP), Wi-Fi AC and Bluetooth 5.0.

“Through the course of lasting development and adjustment of our system and thanks to the cooperative efforts of both Kyivstar TV and inext teams the most effective solution was brought in – inext TV-X, an exclusive set-top box designed to provide the best experience of Kyivstar TV service”, said Pavel Rybak, Head of Kyivstar TV project.

“We’ve received a request from one of the biggest OTT services in Ukraine – Kyivstar TV to develop an up-to-date set-top box model for its service featured with Bluetooth support, in order to connect external devices and use the media player as a home entertainment center, as well as 5 GHz AC Wi-Fi for the best internet connection”, said Maksym Schygol, Product Manager at inext in Romsat company.

Inext set-top-box provides Kyivstar TV’s consumers with an easy and affordable way to watch any entertainment content on their TV. Inext TV-X is based on customized Android 10 (AOSP) operating system (OS).

TV-X sets up easily and comes with everything you need to get started, including a clear in usage remote control, High-Speed HDMI Cable. Wi-Fi AC module helps the device to reach necessary connection speed to watch high-quality content in 4K without LAN cables.

Built-in Bluetooth 5.0 module allows to connect wireless devices: remote controls, gamepads and headphones. Bluetooth 5.0’s primary strengths are improved speed and greater range. In other words, it is faster and operates over greater distances than older versions of Bluetooth. With Bluetooth 5.0 data transfer speed is up to 2 Mbps, which doubles what Bluetooth 4.2 supports.

«inext» – is a Ukrainian company with more than 10 years of experience. Inext’s specialization is development and production of Android STB and media players for B2B and B2C markets. The main feature of the company is the versatility and individual approach in the development of solutions from IPTV/OTT to complex multimedia systems in urban transport networks, as well as advertising and information multiscreen platforms. It is a truly international team, working from Slovakia, Greece, China and Ukraine.

«Kyivstar» – is a Ukrainian telecommunications company that provides communication and data services based on mobile and fixed technologies, including 4G (LTE) in Ukraine. As of 2020, Kyivstar became the largest mobile operator and one of the largest broadband Internet providers in Ukraine, serving about 26 million mobile customers and more than 1 million broadband fixed internet customers in Ukraine (“Home Internet”).

Kyivstar is a part of VEON, one of the world’s largest integrated telecommunications companies, headquartered in the Netherlands. The company operates in the markets of the CIS, Europe, Asia and Africa, and its stocks are traded on the NASDAQ (New York) and Euronext (Amsterdam). 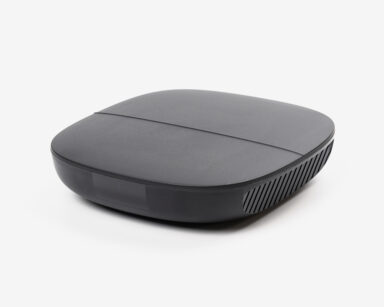 Private design of the B2B model of the set-top box with functionality that depends entirely on the operator’s services.

Connects to any TV with RCA1 or HDMI input, and to the Internet via Wi-Fi or Ethernet.